MacBook Charger Hot: Is It Normal? 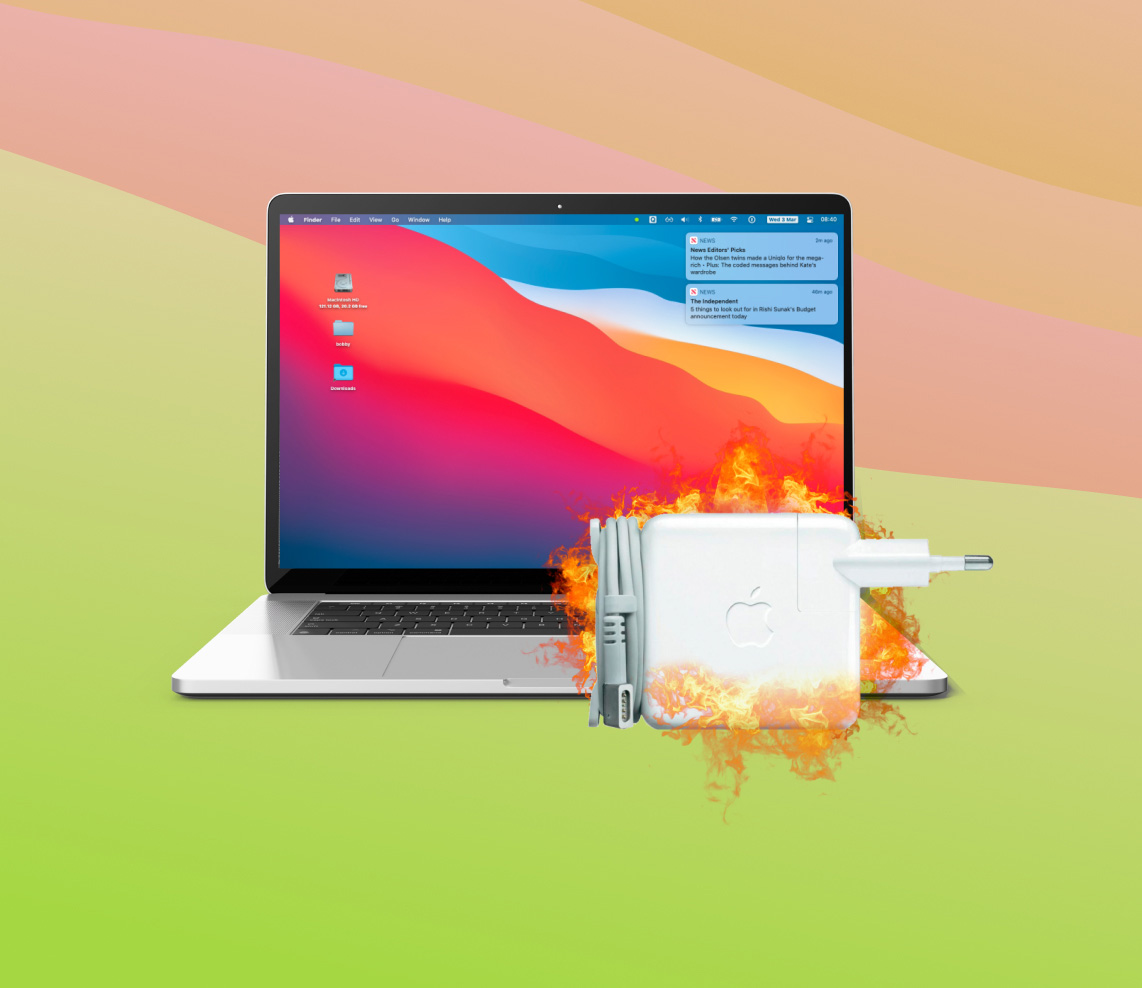 It’s common for MacBooks to get hot when running heavy workloads, such as exporting high-definition video footage. But what about MacBook chargers? Do they get hot as well, or should you be worried that something is wrong with your charger?

How Hot Is Too Hot?

All chargers become warmer when doing what they’re designed to do: charging a battery, so a temperature increase of a few degrees isn’t something you should worry about.

You should start to worry when the charger becomes uncomfortable to hold firmly in the hand.

Why? Because the inside temperature will always be much higher than the outside temperature. If it gets too hot, the electronic components inside may fail and a short circuit may occur and potentially cause a fire.

If your MacBook charger ever gets so hot that it becomes impossible to touch, then you should unplug it from power immediately regardless of how desperate you are to charge your laptop.

Why Do MacBook Chargers Overheat?

MacBook chargers may overheat for many different reasons. Let’s take a closer look at the most common ones.

MacBooks are notorious for being picky when it comes to chargers. Even working third-party chargers from non-reputable manufacturers have caused MacBook users issues, such as producing too much heat when charging.

A faulty charger that has suffered mechanical damage or whose internal components have failed can start overheating and eventually burst into flames, so it goes without saying that it should be replaced immediately.

A faulty battery is another possible cause of overheating. Old batteries do overwork the charger. It does work harder than it should to push electric power into the cells of the battery. This, in turn, makes the charger overheat.

The good thing to do is check your MacBook battery health:

Your MacBook charger is designed to operate in a certain temperature window. If you expose it to boiling temperatures, it’s almost guaranteed to overheat.

For example, quite a few MacBook users have damaged their chargers by placing them near household radiators and other sources of heat. As a rule of thumb, we recommend you avoid placing your charger anywhere you wouldn’t feel comfortable yourself.

Genuine Apple chargers are expensive compared with their third-party alternatives, but that’s because Apple didn’t cut any corners when designing them, so they always deliver exactly the right amount of voltage and current.

An unauthentic battery is equally as problematic as an unauthentic charger. When purchasing a replacement battery, many people choose price over quality, only to pay the price later when their charger starts overheating because the battery is slightly different than the original battery for which it was designed.

If at all possible, always go with a genuine battery, even if it means paying more money. Your MacBook will thank you for it, and you will be able to sleep soundly at night knowing your apartment or house won’t catch on fire.

There are several measures that you can take to ensure your MacBook charger will not overheat:

These five precautionary measures can prevent your MacBook charger from overheating and your MacBook from becoming damaged as a result.

Why Do MacBook Chargers Get Warm?

The job of a MacBook charger is to convert alternating current (AC)  from a wall outlet to direct current (DC) suitable for the battery inside the MacBook.

This conversion is accomplished by components like rectifiers (to convert the AC to DC) transformers (to step the mains down to a working output voltage), and voltage regulators (to keep the voltage constant).

These components emit heat when doing what they’re designed to do. Of course, well-designed laptop chargers can handle the produced heat, but not all chargers are well-designed.

Never Use an Overheating MacBook Charger

At this point, it’s probably clear that you should never use an overheating MacBook charger, but we think that it’s still worth repeating why:

It’s normal for MacBook chargers to become warm when charging the battery. This is because they are responsible for regulating the voltage that goes into the laptop to meet its power needs. However, it’s not normal for chargers to overheat to the point that they can burn your skin. In this article, we’ve described the most common reasons why MacBook chargers overheat, and we’ve also provided tips to help you ensure your own charger never runs too hot.

13 posts
Jeff Cochin
About author
Jeff Cochin has been immersed in the Apple ecosystem for most of his professional career, relying on his trusted MacBook and iPhone when deploying SaaS solutions and troubleshooting server issues. Now, he’s covering the latest Mac news and writing in-depth reviews and data recovery guides for the readers of AppleNApps.
Related posts
Mac
Can You Use A Mac As A Monitor For PS4/PS5? This Post Explains Everything
By Jeff Cochin
6 Mins read
Gamers are always seeking ways to enhance the gaming experience. And it’s not their fault. When you have an incredible game like…
HOW-TOsMac
How To Unlock Volume On Mac: All You Need To Know
By Jeff Cochin
6 Mins read
The MacBook is a very powerful machine with extraordinary features. Many people love and own it because it is durable and guarantees…
Mac
Is MacBook Air Good For Programming?
By Jeff Cochin
8 Mins read
Coding is a CPU-intensive task. Not every laptop on the market is suitable for the job. If you purchase the wrong laptop,…